Aron and Vips make it double for Estonia in FIA F3 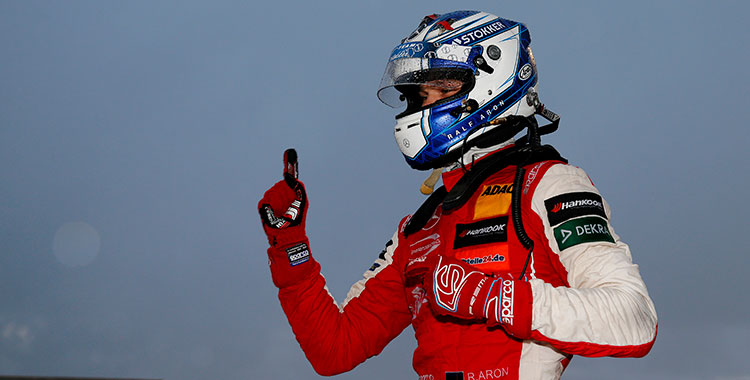 Aron and Vips make it double for Estonia in FIA F3

Due to the heavy rain, the FIA Formula 3 European Championship field started behind the safety car. As conditions initially were too wet, the race was then interrupted. After the second attempt, 25 minutes later, the race finally got underway. Marcus Armstrong (PREMA Theodore Racing) remained first from Ralf Aron, Jüri Vips and Guanyu Zhou (PREMA Theodore Racing). In the battle for fourth, Zhou soon had to let Ferdinand Habsburg get past.

On lap ten, Aron claimed the top position from Armstrong. As both Sebastian Fernandez (Motopark) and Marino Sato (Motopark) slid into the gravel trap almost simultaneously, race control sent out the safety car once more. After the restart, Habsburg and Vips staged a thrilling duel for second place, in which Vips eventually came out on top after several position changes. He took the chequered flag in second place behind Aron and ahead of Habsburg. Daniel Ticktum was fourth across the line from Mick Schumacher (PREMA Theodore Racing), Alex Palou (Hitech Bullfrog GP), Robert Shvartzman (PREMA Theodore Racing), Fabio Scherer (Motopark), Jehan Daruvala (Carlin) and Enaam Ahmed (Hitech Bullfrog GP).

The next FIA Formula 3 European Championship race weekend will be taking place at the Nürburgring in a fortnight.

Ralf Aron (PREMA Theodore Racing): “Conditions weren’t easy, but I like them. When racing in karts in the past, I didn’t like such conditions, but meanwhile, I can cope with them quite well. At the beginning of the race, I had problems to keep my positions, but then things went better. I managed to overtake Marcus to take the lead. When the race was red-flagged early on, conditions were really difficult. For the restart, they were then considerably better, so the interruption was justified from my perspective.”

Jüri Vips (Motopark): “It took a while until I was finally able to overtake Marcus Armstrong. When I finally made it, Ralf was already too far ahead. In the rain, things are normally going quite well for me, that has proven to be right here.”

Ferdinand Habsburg (Carlin): “This was a special race. First of all because of the rain, but also because my sister came to visit me during a race of the FIA Formula 3 European Championship for the first time. Obviously, she brought me luck and I am happy that I was able to score my first podium finish of the year today. My tyres worked well from the beginning and I was able to attack right away. However, I couldn’t keep the pace until the end. Nevertheless, I am very happy with the result. The race and particularly the battle with Jüri were great fun. Now, I hope to be on the podium more often.”