Vips wins and moves to 2nd in the championship

Home - News - Vips wins and moves to 2nd in the championship 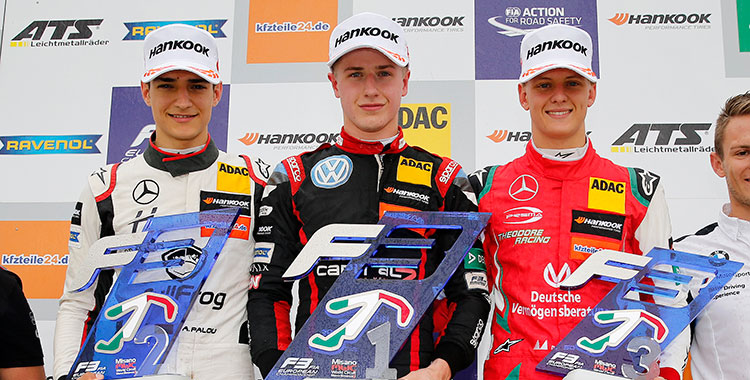 Vips wins and moves to 2nd in the championship

Many drivers having exceeded track limits in second qualifying and they incurred grid penalties as a result. Jüri Vips was allowed to keep his pole position, but behind him, it was Enaam Ahmed (Hitech Bullfrog GP) who inherited second place. Jehan Daruvala (Carlin) and Alex Palou were on the second row, Sebastian Fernandez (Motopark) and Mick Schumacher lined up on the third row.

Vips returned from the opening lap as the race leader ahead of the Hitech duo Palou and Ahmed. The Spaniard initially put the leader under pressure while Ahmed had to let Daruvala and Schumacher pass on the fourth lap. Four laps later, the Indian made a mistake from which Schumacher benefited to claim third place. However, the German wanted more and closed the gap to Vips and Palou in front of him with a few minutes remaining. Still, it wasn’t enough to mount a challenge and thus, Vips won from Palou and Schumacher.

Jüri Vips (Motopark): “It was one of the hardest races I have ever driven. When the track is partly damp, being the leader in the race is never easy as you don’t have any reference points. It seemed as if I had some critical moments on every lap. Then, I tried to stay calm and I am now very happy with this victory.”

Alex Palou (Hitech Bullfrog GP): “It is nice to be back on the podium. On the last weekends, we had some issues, but in this race, things were going pretty well. I think that I was even faster than Jüri in the early stages, but it certainly wasn’t easy for him, being in the lead. Concerning the choice between rain tyres and slicks, I was quite relaxed and just looked at what the others were doing.”

Mick Schumacher (PREMA Theodore Racing): “I had expected the track to be more slippery than it actually was. Therefore, I was very cautious, probably even a little bit too cautious. After that, I then tried to work my way up again. Towards the end, I had closed the gap to Jüri and Alex, but there wasn’t enough time left to start an attack. I am still happy with third place.”