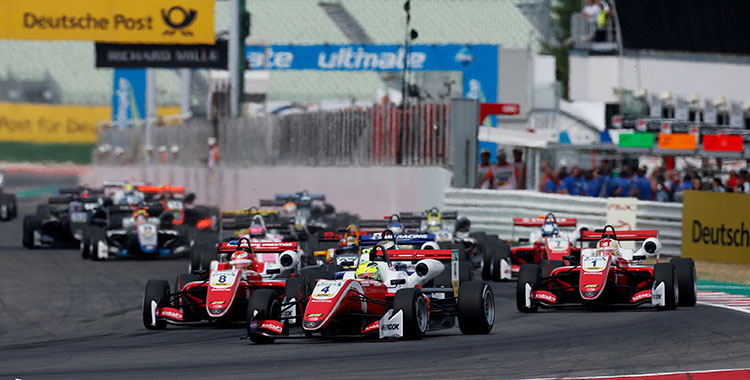 After his victories at Spa-Francorchamps and Silverstone, Mick Schumacher (PREMA Theodore Racing) also confirmed his current good shape at the 4.226 kilometres long Misano World Circuit Marco Simoncelli. The German, who is racing for the only Italian team in the FIA Formula 3 European Championship, won the 19th race of the season from the two rookie drivers Marcus Armstrong (PREMA Theodore Racing) and Robert Shvartzman (PREMA Theodore Racing). In the drivers’ standings, Daniel Ticktum (Motopark) remains in the lead, the Brit took the chequered flag at Misano in sixth place.

Once the red lights on the start line gantry went out, Mick Schumacher took the lead. Marcus Armstrong claimed second place from Robert Shvartzman and Guanyu Zhou (PREMA Theodore Racing), who had to defend his position from a charging Daniel Ticktum in the first corners. Soon after that, Zhou had pulled a slight gap and went on to put Shvartman under pressure in the battle for third. However, the young Russian successfully defended his position from the experienced Russian.

Out in front, Schumacher maintained his margin at around 1.5 seconds throughout the race and eventually crossed the finish line as the winner, just over two seconds ahead of his teammate Armstrong. Shvartzman secured the final podium slot. Thus, drivers of the PREMA Theodore Racing team locked out the podium in the squad’s home race.

Mick Schumacher (PREMA Theodore Racing): “The potential has always been there, but initially, we weren’t able to make full use of it. Since Spa-Francorchamps, however, things have been going pretty well and I am happy that I am now also able to show what I can achieve in the races. Today, I was able to pull a gap at the start and on the first lap and then I tried to manage it.”

Marcus Armstrong (PREMA Theodore Racing): “Mick was really good on the opening lap and was able to pull a gap straight away. After that, I was no longer in a position to still put him under pressure, although I had actually planned it. I think that the PREMA Theodore Racing team is so strong here at Misano as both the team and we as the drivers have a lot of experience at this track.”

Robert Shvartzman (PREMA Theodore Racing): “I had a close fight with my teammate Guanyu Zhou, we were certainly fighting side by side for five laps. It was a nice and a fair battle, in which I finally got a little more room to breathe after he had made a mistake.”