Juri Vips wins as rookie drivers lock out the podium 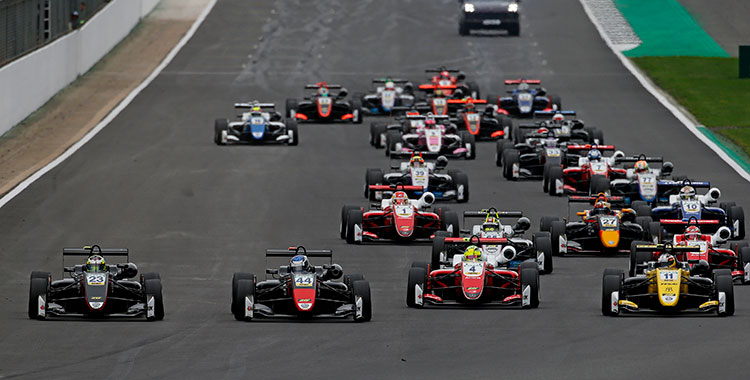 Juri Vips wins as rookie drivers lock out the podium

At the 5.901 kilometres long Silverstone Circuit, Jüri Vips (Motopark) claimed his second win of the season in the FIA Formula 3 European Championship. While the Estonian rookie almost led from lights to flag, Sacha Fenestraz (Carlin) was second across the finish line. Jonathan Aberdein (Motopark) came third to round out the clean sweep of the overall podium for rookie drivers. Daniel Ticktum (Motopark), the FIA Formula 3 European Championship points’ leader, extended his margin in the drivers’ standings in spite of finishing only sixth.

As racing resumed on lap five, positions at the front remained unchanged. Race leader Vips immediately pulled away while his nearest rival Fenestraz initially was unable to increase his margin over third-placed Aberdein. Ahmed didn’t manage to keep up with the South African while he was also under pressure from Schumacher and Ticktum behind him. In the remainder of the race, Fenestraz also pulled clear and eventually brought second place home, just as safely as Vips secured his second victory of the season and Aberdein did with his third position. Ahmed, Schumacher, Ticktum, Alex Palou (Hitech Bullfrog GP), Guanyu Zhou (PREMA Theodore Racing), Ferdinand Habsburg (Carlin) and Robert Shvartzman (PREMA Theodore Racing) rounded out the top ten.

Next week, the youngsters already have their next chance to battle for points and positions as the FIA Formula 3 European Championship season continues at Misano in Italy.

Jüri Vips (Motopark): “It wasn’t an easy race. On the opening lap, I had to overtake Sacha for the lead, which was crucial for the rest of my race as I knew that overtaking is very difficult here. Moreover, my rear tyres degraded more and more as the race went on. I am happy that I still have won. That gives me a big moral boost for Misano.”

Sacha Fenestraz (Carlin): “On the opening lap, I gave all I had in the battle with Jüri and braked very late, but he braked even later. After that, I had no chance to overtake him anymore. This weekend, Motopark was the best team. Therefore, I am happy that I am classified between two of their drivers here. The key to my good weekend was qualifying, in which I finally got it right.”

Jonathan Aberdein (Motopark): “I am very happy with my repeated third place this weekend. Also when the drivers behind me were getting closer, I wasn’t really worried. I concentrated on avoiding any mistakes, because I was well aware that there was no way for them to get past without me making a mistake.”