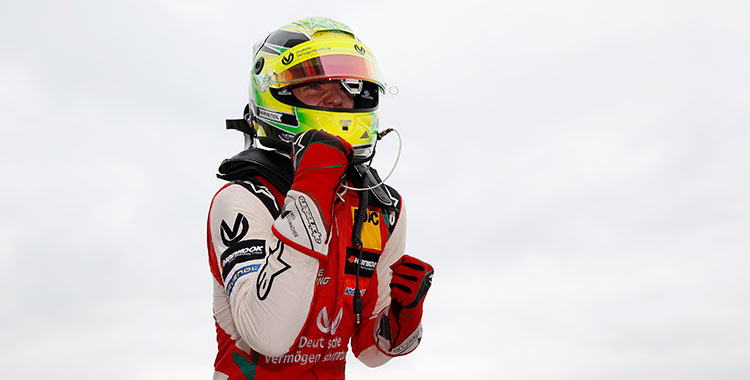 Having started from second place on the grid, Mick Schumacher moved up into the lead on the first few metres. On the opening lap, he already built a margin of more than one second from his nearest rival Fabio Scherer (Motopark), who had started the race from pole-position. Next up behind the Swiss were Jüri Vips and Jonathan Aberdein.

At this time, Daniel Ticktum, who had taken the championship lead as the winner of the first race at Silverstone a few hours earlier, was outside the top ten, but was looking for his chance in demanding duels.

Mick Schumacher (PREMA Theodore Racing): “The story of my race is told quickly: my start was good, I was able to pull a gap on the first lap and then I tried to maintain it. Around the halfway point, my rivals closed up a bit, but then I pushed more and re-established my initial margin. I am really happy with this victory.”

Jüri Vips (Motopark): “I am really happy with second place. Apart from first qualifying, it has been a good weekend for me so far. In this race, I could perhaps have achieved even more, but there was contact between Fabio and me in the first corner and then I was behind him for a long time. Once I had found a way past him, Mick was already too far off.”

Jonathan Aberdein (Motopark): “This is my maiden podium finish in the FIA Formula 3 European Championship and I am very happy with it. My start and my first laps were good and Fabio’s retirement promoted me to third place. Here at Silverstone, the Motopark car is really fast, but we have made improved really well in the past races. Seeing that the hard work by the team pays off is really nice.”